Outside Xbox: How to create merch 3 million fans will love

How did gamers Andy Farrant, Mike Channell, Jane Douglas, Ellen Rose, and Luke Westaway turn their passion for gaming into a successful YouTube channel?  Better yet, how did they acquire 3,000,000 loyal fans and create a successful merch line their followers are proud to wear? Check out their story below to learn more. 😉 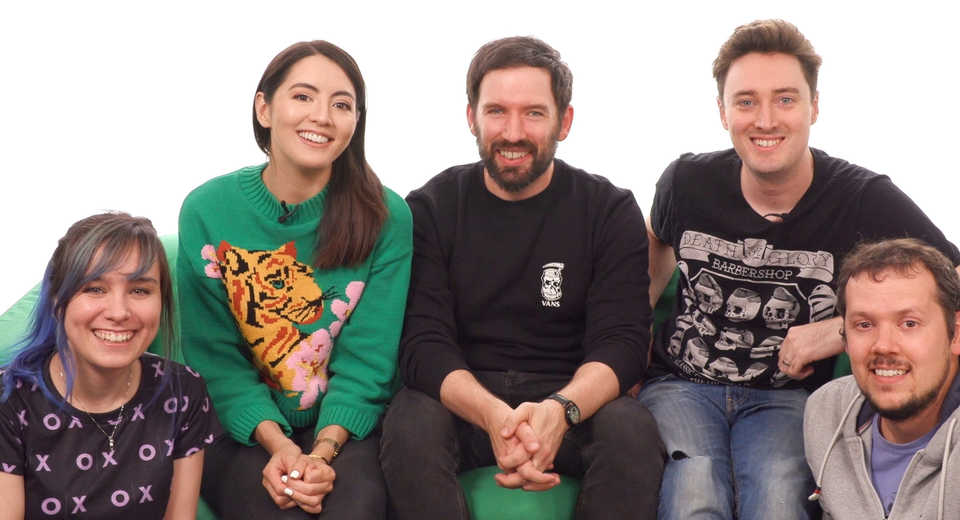 The Outside Xbox team

Before creating Outside Xbox (2.5m subscribers), Andy, Mike and Jane knew each other from their respective backgrounds in the gaming industry as writers, presenters and producers. The group of three founded Outside Xbox in 2012 as a platform for sharing their love of gaming by showcasing videos created as they played Xbox One and Xbox 360 as a team.

Over time the channel evolved to include daily entertainment-led videos about video games, tabletop gaming, and live streams too. In 2016, they launched a new companion channel called  Outside Xtra (754k subscribers)—dedicated to covering the wider world of gaming and gaming culture. At that time Ellen and Luke became the two newest members of the Outside Xbox Team as the hosts of Outside Xtra.

“We love making YouTube videos for everyone to enjoy, and we knew there was more we wanted to cover. This is when I suggested making a companion channel to Outside Xbox–one that covered all of the great games, platforms and geek culture that we don’t have time to.” – Andy Farant, co-founder of Outside Xbox 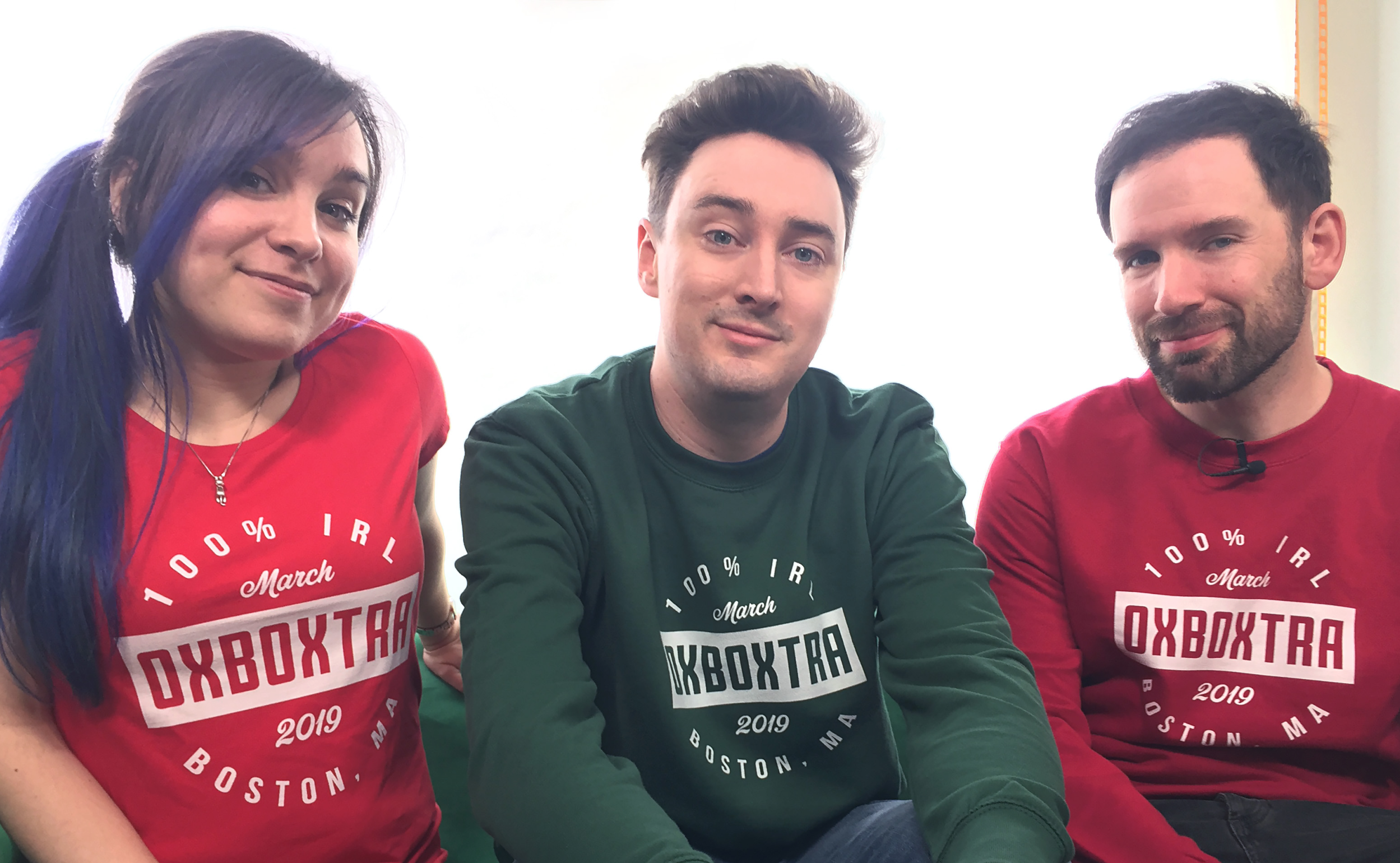 The search for merch

As their following grew, the Outside Xbox team considered creating an online merch store. Time was the biggest inhibitor to selling merch—running the channel had become a full-time job and the team didn’t have time to manage sourcing stock, shipping orders, customer support, etc. on top of everything else.

They needed an end-to-end solution that could help save time and offer their fans the quality and service they deserved. Plus the Outside Xbox Team is based in the U.K. but has an international following, so a localized shopping experience (currency, language, etc.) with global fulfillment and delivery is a must-have feature too..

After researching various platforms and ordering samples, the team decided Teespring was the solution they’d been looking for:

“We had wanted to create an online merch store for Outside Xbox and Outside Xtra for a long time—we had ideas for designs but very little time to make them real. So we looked at various merch platforms, compared the services they offered, ordered sample products from each. Teespring had the right combination of product quality and variety, the right kind of services, and the right kind of international offering for our international audience.”  – Jane Douglas, co-founder of Outside Xbox

After deciding on Teespring, the team quickly chose products and uploaded their designs to the Teespring Launcher. Immediately after they created their custom storefront and branded it using Outside Xbox’s channel logo and colors. With their products and store created they could get back to focusing on creating content for their channel. 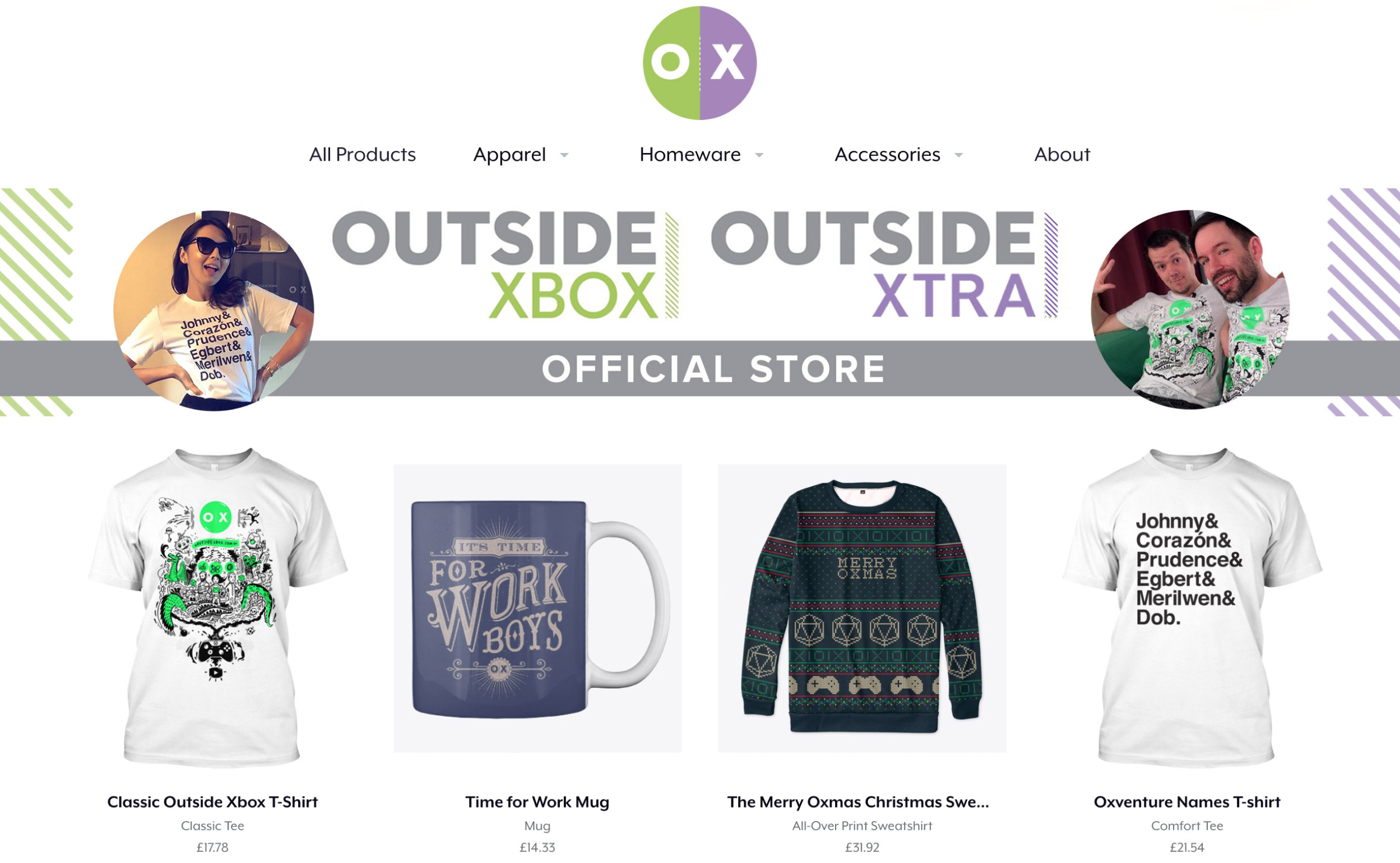 Creators know you can’t simply slap a design on a product and sell it. Your merch has to mean something to your followers. So when it comes to creating new designs, Outside Xbox love to make it a team effort. This includes creating designs they would want to buy and wear themselves as well as getting inspiration from their community and content. The team says listening to their fans is key to creating successful merch designs as inside jokes from the channel and fan requests sell best:

“Sometimes a trope or a gag or a line of dialogue from the videos will really resonate with our commenters, or someone will get in touch on social media with something they say they’d love on a t-shirt.” – Andy Farant, co-founder of Outside Xbox 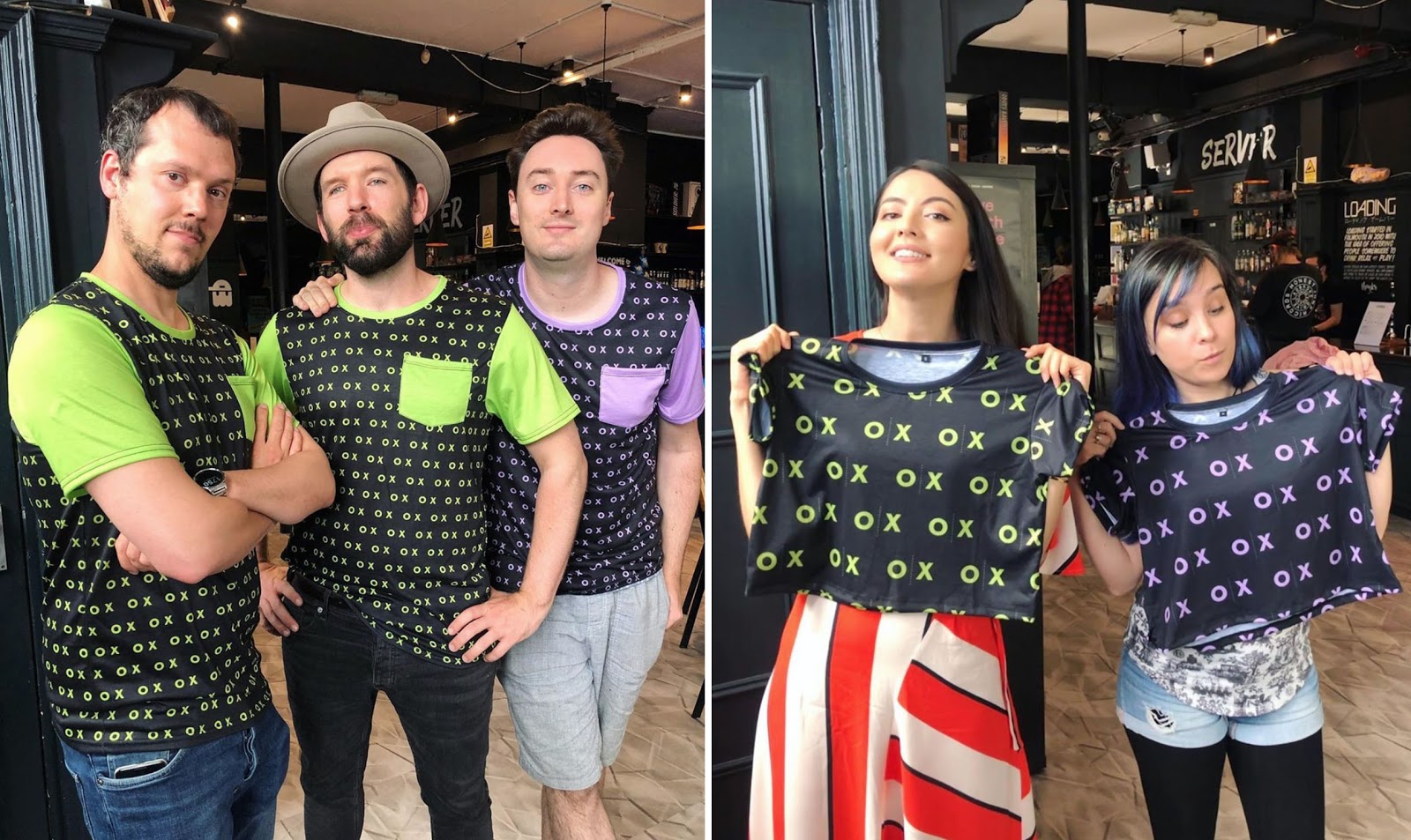 Teespring tip: If you need help creating designs to put on your products, check out Placeit. If you sign up with Teespring you’ll get access to unlimited design templates, lifestyle mockup images, social media images, etc. for less than $12 a month. Learn more

The team at Outside Xbox utilize their existing platforms to showcase their merch–and they do so in a number of ways, which we delve into below. Doing this is the most effective way of letting their fans know about new products and promotions they are running!

Ordering merch samples and regularly wearing them in videos is the team’s go-to method for promoting new products. They also create dedicated videos to explain the story behind new designs and products they release.

Announcing merch during live-stream is also an effective method creators can use to create hype around products and show them live in action. Creators can use YouTube’s new ‘pin’ tool during live stream to make products more accessible than ever on stream.

Sharing promo codes has been effective with Outside Xbox fans, especially around seasonal events like Halloween and Christmas. The team share codes across social media and within their live streams for fans to take advantage of for limited periods of time. 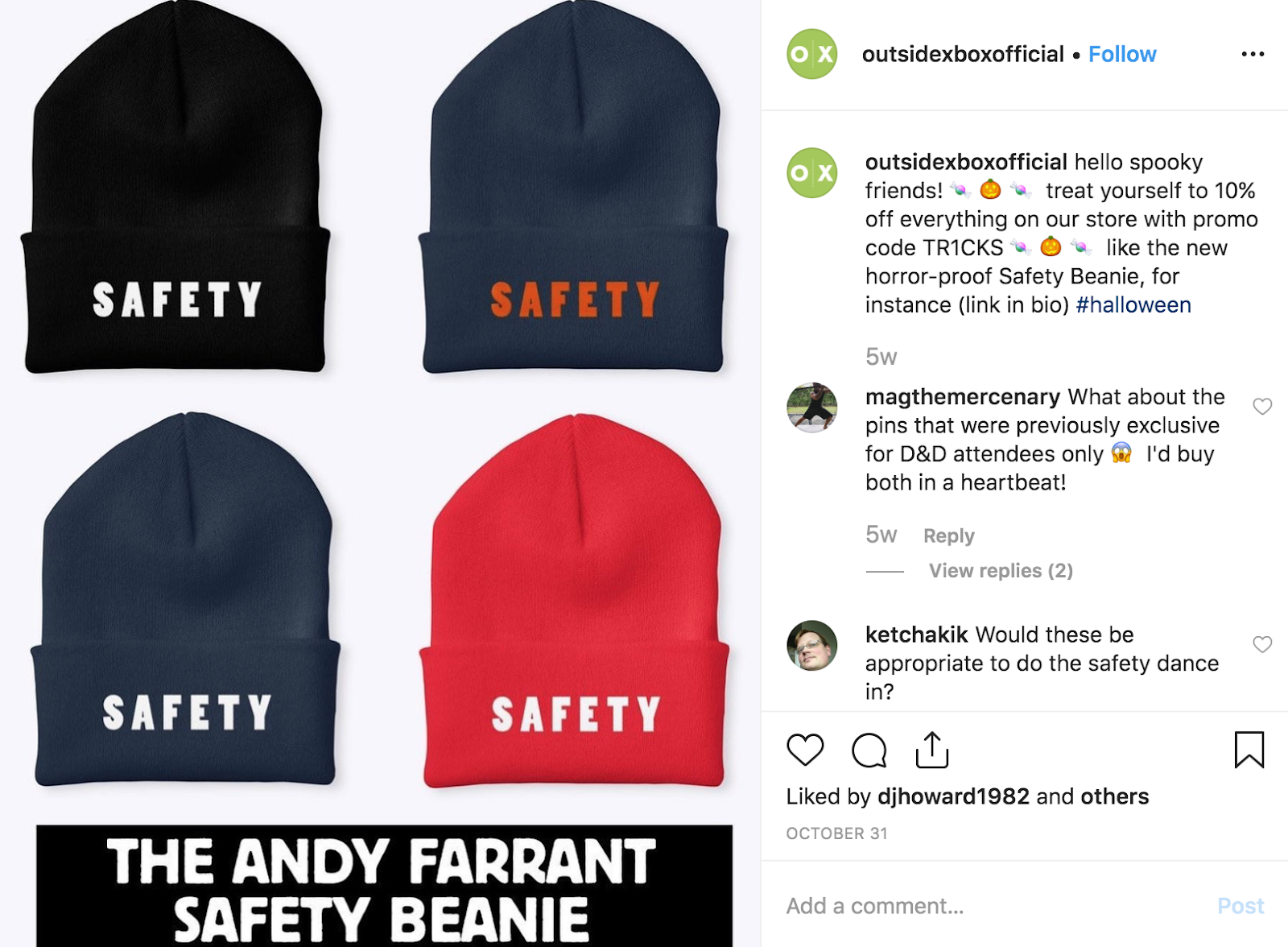 The Outside Xbox team also rewards loyal fans by announcing new products in the members-only community tab on YouTube. This way members can get an exclusive first look at new items and access to special promo codes.

Fans sharing the Outside Xbox love

Last but not least the team also loves to receive and share fan selfies wearing their merch. User generated content (social proof) is powerful for validating the quality of the products as well as creating a sense of community between fans. Outside Xbox says seeing their merch being worn by fans in photos, videos and at events is exciting and makes the team feel closer to their online community than ever before. 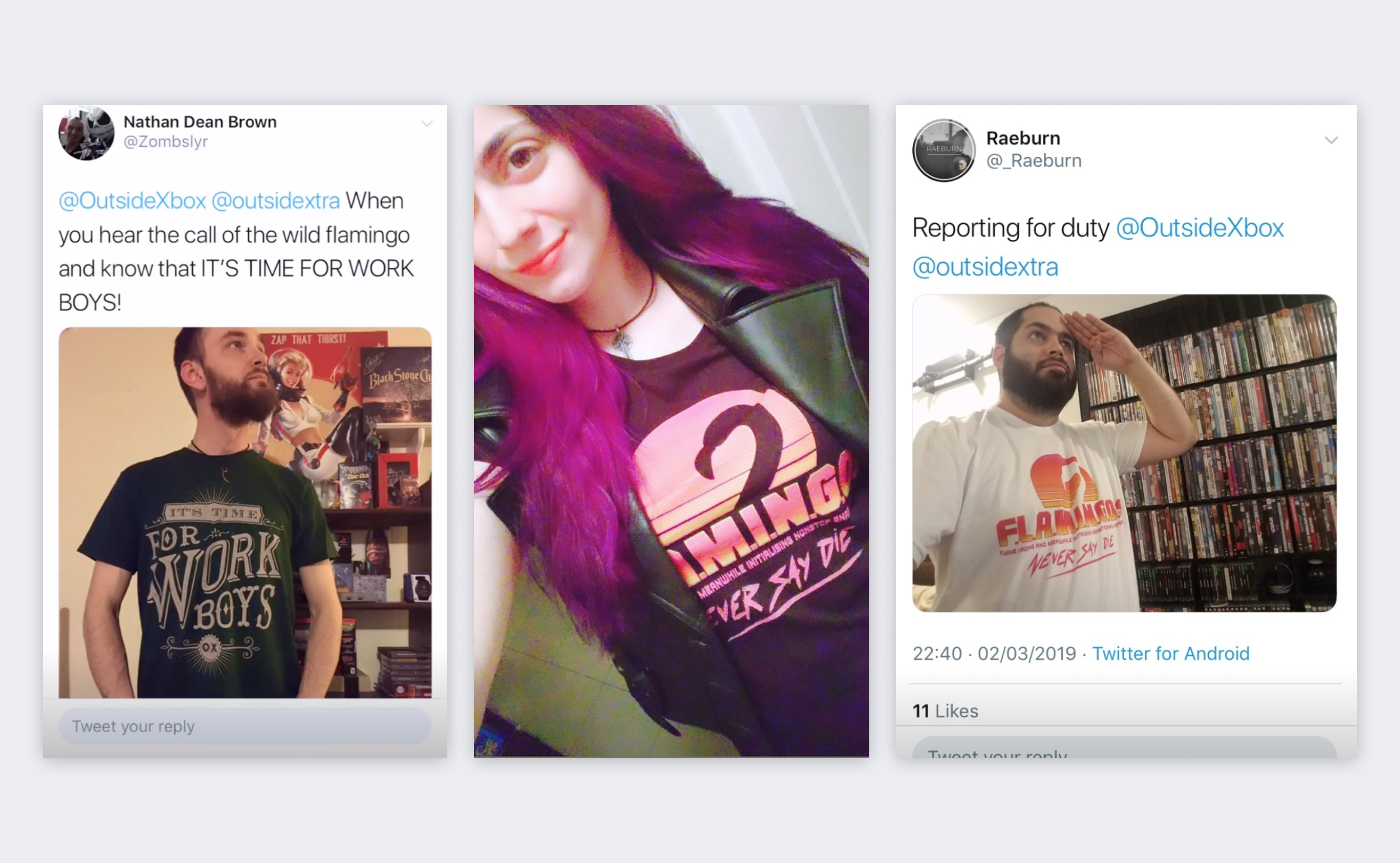 Ready to create your own success story? Visit the Teespring Launcher to get started.

One response to “Outside Xbox: How to create merch 3 million fans will love”